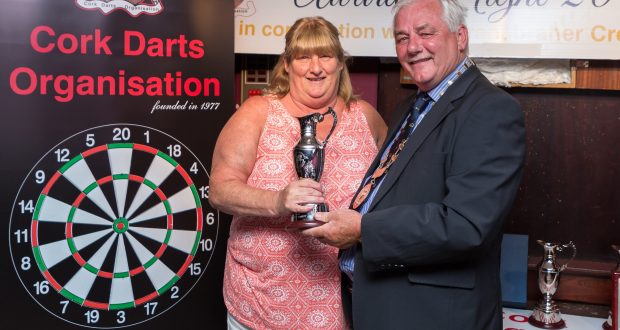 The ladies leagues within the Cork Darts Organisation returned to the oche on Thursday night last and it was last seasons team of the season the Joshua Tree who were the top point scorers on the opening night.

Ma Dullea’s were the victims of the Blarney Street side who racked up five wins without reply in the ladies A division as Kelly Forde, Mary Nugent, Siobhan Keohane, Eileen Jones and last seasons ladies player of the season Breda Barrett all showed impressive form.

Annette Hawkins opened with a win for the Friars Walk Tavern in their A division league game against Glenryan and she was followed by Carina Nova and Silke White adding further wins while two points for the Glenryan were won by Sharon Lynch and Allison Goulding.

Residence were the winners of the Blarney Street local derby as they accounted for Horgans by 3-2 with wins for the Residence coming from Caroline Coutts, Sabrina Coutts and Maria Healy and wins for Horgan’s coming from Nuala Madden and Noreen Hosford.

Over in the ladies B division league the Local were top scorers as they ran out 5-0 winners at home against the Gallows with Mary O’Neill, Christine O’Mahony, Kay Monaher, Deirdre Long and Martina Murphy all winning for the home team.

Island Tavern welcomed the Widows from Glanmire  also in the ladies B division league and in a very close encounter it was the Tavern who won here 3-3 with decent performances coming from Margaret Kennedy, Peggy Long and Hazel Lynch with wins for the Widows coming from Maura Lynch and Bernie O’Flynn.

Glenryan were another side to claim a 3-2 home win as they got the better of the Red Cove Inn as Christine Hennessy, Susan Herlihy and Lilly Byrne won for the home side while two wins for the Red Cove came courtesy of Caroline O’Regan and Lilian Higgins.

The second series of games in the Cork Darts Organisation Fosters sponsored leagues was completed on Monday night last and the meeting of both of the Groves sides proved to be a very one sided affair, albeit the Groves second squad were missing a couple of players who may have shaped a rather different scoreline to the match.

Tower Bar made it two wins from two starts as they accounted for the visiting Joshua Tree 1 by 4-3 despite conceding the opening two games to the away side as Damien O’Driscoll and John Paul Dowdall won for the Joshua Tree.

The Tower then ran up the following four games without reply from the Joshua Tree through Anthony Murray, Ryan Courtney, Dinny Bob’s and Timmy O’Riordan but John Wall stopped the rot for the Josh as he took the last and seventh game.

The Joshua Tree second team had no luck as they came up against a red hot Hennessy’s side also in the Fosters super league losing 7-0, but it has to be said that six of the seven games all ended in 2-1 scorelines.