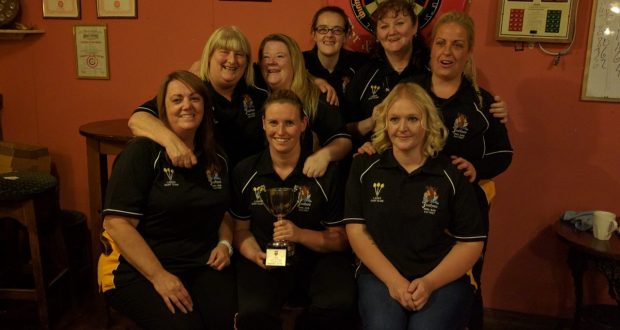 Josh ladies bring the Tavern down to earth

High fliers of recent weeks the Friars Walk Tavern were brought back to terra firma by a very impressive showing from the Joshua Tree in the ladies A division league at the winners Blarney Street venue on Thursday night last.

Mary Nugent got the Josh off to a winning start as she came out ahead in the best of three legs encounter by 2-1 against the unbeaten Friars Walk Tavern number one Annette Hawkins but Bronagh Mallon had the Tavern back on level terms as she accounted for Siobhan Keohane by the same scoreline.

The home side then went on to claim the remaining three games without the loss of a single leg, with Breda Barrett accounting for Carina Nova, Ciara Haugh defeating Silke White and Eileen Jones getting the better of Kay McCarthy.

Horgans travelled to the nearby Glenryan Tavern and went home on the better side of the five points available to be won again here  in the ladies A division league.

New signing for the Glenryan Tavern, Sharon Lynch continued in winning form as she inflicted a 2-0 loss on Catherine O’Mahony but Hoggies recovered immediately and they secured the following two games through good performances from Eileen O’Neill winning 2-1 against Hannah Shinkwin and Phil Murphy winning 2-1 against Allison Goulding.

Michelle Barry stopped the rot for the home side as she came through to win 2-0 against Laura Murphy but it was Horgans who had the final say with Noreen Hosford coming out ahead by 2-1 in her clash against Glenryans Mary O’Connor to seal a 3-2 win overall for Horgans.

Ma Dullea’s 1 came through their encounter against the second squad from the Tower Street premises with a 5-0 win and only dropping three legs in doing so.

Over in the ladies B division league Glenryan 2 had a 3-2 win over the Local with winners in Kellie Anne Byrne, Susan Herlihy and Theresa Kelleher with wins for the Local coming from Mary O’Neill and Martina Murphy.

Island Tavern ladies were 3-2 winners over the Red Cove Inn as Hazel Lynch, Margarewt Kennedy and Jackie Long all won for the Tavern while wins for the Red Cove came through Aileen Callanan and  Gillian Hegarty.

Also again this season there will be a plate competition on the day with all first round losers being entered into the event thus guaranteeing at least two games for each team on the day.

All entrants must present at the administration table in person and no entries will be taken over the phone, only active team playing members of the Cork Darts Organisation can enter into the men’s doubles.