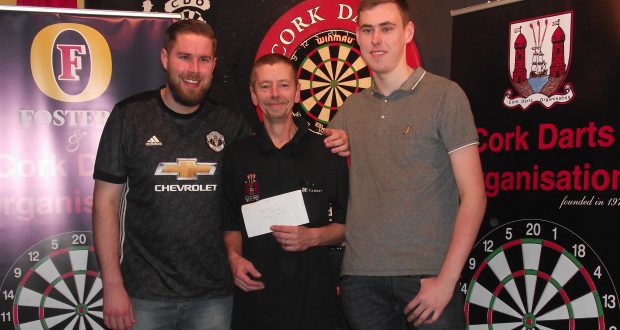 There were some surprise exits from the main competition in the early stages and last season’s winners, John Paul Dowdall and Damien O’Driscoll had to concentrate on the plate event as they went down to Stephen O’Connor and Kevin McDonnell  of the Tower/Harp early on.

Throwing really steady all through the championship were Ciaran Teehan and Jason O’Donovan representing the Harp  and they caused a real upset as they accounted for another strong pairing from the Harp in Radek Szaganski and Richie McGrath and also defeating Chris Scannell and Tim Marshall from the Gerald Griffin in the semifinal.

Also making progress at the other end of the draw were David O’Donovan and Dean Forde of the Groves and they accounted for another Groves pairing in their semifinal, brothers Blaine and Dean Meighan to book their spot in the stage final against the Harp team.

The final proved to be a little bit of an anti-climax as the Groves pairing never brought their A game to the oche, but that said they really were throwing under pressure at all times from Teehan/ O’Donovan who really lit up the treble 20 on numerous occasions  to run out 3-0 winners and deservedly so.

The plate competition was once again very well received by all present at the Blarney Road venue, and after a what was a very long day at the office for the organisers the plate final saw the Top of the Hill pairing of Kyle Hosford and Chris O’Rourke take the title on a 2-0 scoreline against red hot favourites and

The Joshua Tree was the venue on Friday night last for the final fundraiser for the CDO members nominated charity which included a singles competition for the Cork Darts Organisation charity shield.

After a night of intensive darts playing the final two players remaining, Dean Forde representing the Groves and Stephen Coveney flying the flag of the Joshua Tree fought out a marvellous battle with Forde claiming the honours.