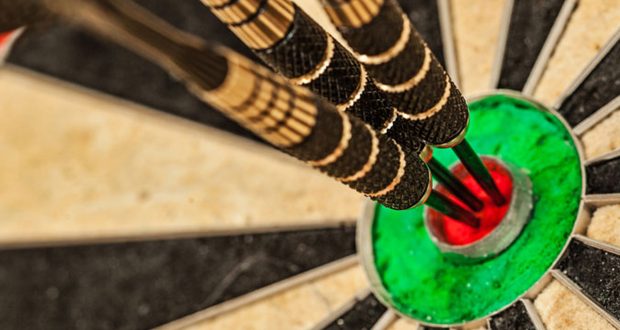 Riverstown Inn and St, Vincent’s came through to take the respective league titles in the Cork Darts Organisation Fosters sponsored competitions recently in finals played at the Glenryan and the River Lane.

The opening game of the final saw Riverstown’  Eddie Moynihan take the lead as he won the first leg but Gallows Ray Glynn hit back to level and in a very close third and deciding leg it was the Riverstown player who came through to take it.

The second game of this first division final then saw Steve Harrington bring the match all square as he accounted for Riverstown number two John Byers by 2-0 and in an exchange of wins by both sides it was Declan Cotter winning 2-1 for the Riverstown against Aaron McGrath and Willie Kennedy for the Gallows winning 2-0 against Mark O’Leary that had this final all even at 2-2 each at the break.

Gallows put themselves within one game of victory as they took the fiftrh through Niall O’Shea winning 2-0 ahead of Dave Power but the run in went the way of the Glanmire team as Vince Moynihan accounted for Chris Musgrave 2-1 and Damien O’Donovan took the final game 2-1 against Cian Harrington.

River Lane was the venue for the final of the Cork Darts Organisation junior league between St, Vincent’s and Ma Dullea’s second squad and it was the Saints who opened with the first win of the final as Chris O’Connell was a 2-1 winner over Colin Dennehy.

Two more wins followed for the Blarney Road team as Branimir Softic won 2-0 against Phillip Cotter and Darren Crinnion came through against Gerry Reilly by the same scoreline with Mossey Holland taking the only win for Ma Dullea’s at number four with a 2-0 win over David O’Shea.

The arrears were reduced even further as Ma Dullea’s Tony Hornibrook also won 2-0 against John McSweeney but Vincent’s were not going to be denied and a fighting perfgormance by them in the remaining two games saw Martin Cronnin win against Tony Hornibrook and John Neville take the final game against Alan Greaney for a momentous win.

St, Vincent’s is the venue this afternoon for the annual men’s Fosters sponsored adult men’s doubles championships and plate competition.

Entries for the competitions will be accepted at St, Vincent’s between 2.30 and 3.30pm with first darts in the air at 4pm.

Entries will not under any circumstances be accepted over the phone and only active team playing members of the CDO can enter into the doubles championship.

Sympathy of the CDO is extended to John Twomey, Fowley’s/ Shamrock Bar and Ferry Boat Inn, and his extended family on the recent sad passing of Johns wife Geraldine.

2017-12-27
Frank Goulding
Previous: Ladies are half way through the 2nd comp of the season.
Next: logo