Don't Miss
Home > Uncategorised > Harp do the double at the Gallows. 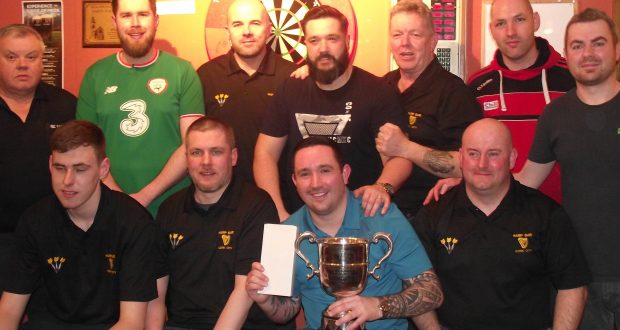 Harp do the double at the Gallows.

The Harp came through to claim the Cork Darts Organisation Fosters sponsored super cup with two hard fought wins over the Joshua Tree in the semifinal and the Tower Bar in the final played on Monday night last at the Gallows.

The Harp came through a cat and mouse semifinal  having led 2-1, then found themselves 3-2  in arrears to eventually come through by 4-3 against the Joshua Tree 1 while their opponents in the final, the Tower Bar had a 4-0 win over the Joshua Tree second team in their semifinal.

The final saw the Tower come out of the blocks in storming fashion as they took the first two games with impressive wins by Steven Hill over Radek Szaganski by 2-0 and William Fouhy by 2-1 over Richie McGrath.

However that winning momentum was stalled as Gregg Byrne was a 2-0 winner against John Leonard and another 2-0 win followed for the Harp in the fourth game as Garry Halpin accounted for Stephen O’Connor to leave it all square at two games apiece at the break.

The Resumption saw the Tower regain the advantage as Mike O’Brien took a 2-0 decision against Tom Biggane only for the Harp to draw level with a man of the match performance from  Jason O’Donovan and they claimed the trophy with another 2-0 win through Kevin McDonnell in the seventh and final game against Tim O’Riordan.

In ladies darts Ma Dullea’s played host to the Glenryan in the Cork Darts Organisation A division cup and came through on a 3-2 scoreline with wins coming from Freda Uniacke, Kathryn Hewitt and Aisling ferriteur while the wins for the Glenryan came from Allison Goulding and Mary O’Connor.

Residence were another side to score a 3-2 win as they accounted for Horgans in a Blarney Street derby, Caroline Coutts, Michele Gould and Maria Healy were the points winners for the Residence as against wins for Hoggies by Eileen O’Neill and SadieHurley.

Monday night is a free from competition night due to the INDO inter-counties championships being held over the weekend at the West County Hotel in Ennis but action will resume on the oche on Monday next March 5 with the first series of games in the Crean and McGarry trophy, Fosters first, second and junior division division trophies.

Games in the second and junior divisions will be played over the best of three legs of 301 double in and the mugs away rule will apply in both divisions.

Final entries will be accepted at the Joshua Tree on Tuesday night for the CDO city individual championship sponsored by Jason Galway Decorating.

2018-02-22
Frank Goulding
Previous: Ladies are half way through the 2nd comp of the season.
Next: logo