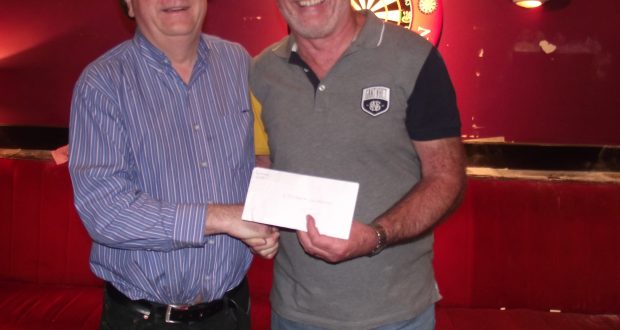 Thirtyfive years after winning his first Cork Darts Organisation singles title Stephen Coveney showed yet once again why he still has so much to offer to the sport of darts as he retained the CDO Fosters premier players individual league played last week at the Local.

Stephen Coveney has also represented his country and has also captained his county to national success, Coveney still has the appetite for the game of darts that he had back in 1981 when he began and this shows through when he takes to the oche in the local league every Monday night through the darts season with his Blarney Street based team the Joshua Tree.

Coveney’s qualifying group had him alongside Blaine Meighan, Pat McSweeney, Damien O’Driscoll and Stephen Lynch and an opening 3-1 loss to O’Driscoll certainly was not the start he was looking for.

However he settled in and wins against Blaine Meighan and Stephen Lynch and a 2-2 draw against Pat McSweeney saw him come through his group in second spot to qualify for the round of 16 knockouts.

Coveney’s opponent in the final, Ciarán Teehen was also having a very good day as he topped his group ahead of Adam Field who would also go on to have quite a good day.

Quarterfinal results saw Field get the Better of fellow team-mate Robert Duke, Coveney proved to be better than O’Shea, Kearney defeated O’Driscoll and Teehan overcame Murphy with the resulting semifinals seeing Coveney defeat Field and Teehan overcome the challenge of Kearney with Coveney taking the title ahead of Teehan on a comprehensive 4-0 scoreline to add yet another paragraph to his most impressive CV.