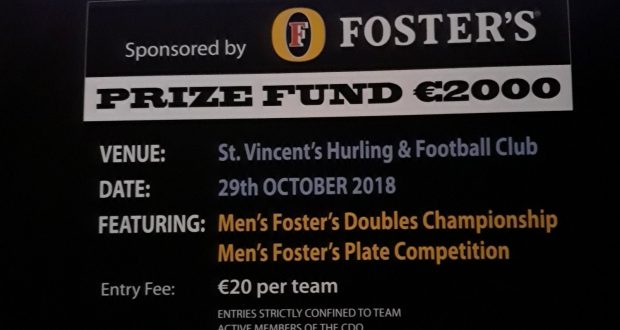 St, Vincent’s has been the location since 2001 for this long standing Cork Darts Organisation men’s doubles championship and this will be the fourth occasion that a plate competition has been added to the bill at this October Bank Holiday event.

The day at the club will begin at 11am when members of the Cork Youth Darts committee will be in attendance to accept names up until 11.45 for the youths singles championship which will get underway at 12 mid-day.

Entries for the adult doubles will be taken from 3pm up until 3.45 and first darts will be thrown in the air at 4.15pm.

All entrants must present themselves in person at the administration table when making their entry and absolutely no entries will be taken over the phone, there will be a total prize fund of €2,000 available to be won on the day.

The ladies returned to team action on Thursday last after completing their annual singles championship and in the A division the Friars Walk Tavern won their away clash against the Glenryan Tavern by 3-2.

The Tavern took the first three games with wins coming from Annette Hawkins, Silke White and Carina Nova over Hannah Shinkwin, Sharon Lynch and Michelle Barry while the Glenryan had winning performances from Alice Landy and Mary O’Connor.

Ma Dullea’s also won away as they accounted for Horgan’s with Freda Uniacke, Kathryn Hewitt and Aisling Ferriteur all winning for the Tower Street side while winning points for Horgan’s came through Nuala Madden and Sadie Hurley while the remaining game in the A division saw the Joshua Tree inflict a 5-0 whitewash over a hapless Residence with fine performances coming the winners through Ciara Haugh, Siobhan Keohane, Mary Nugent, Breda Barrett and Kelley Ford.

The Cork Darts Organisation charity shield open singles championship will be held at the Joshua Tree on Friday November 16 and it will carry a prize fund of €500.

This is the first occasion in more than 30 years that the CDO has held an open competition so thus giving an opportunity to all interested darts players to pit their skill against the best in the CDO.

The competition is open to all darts players both male and female and will be confined to the first 48 paid up entries received by or before Tuesday November 13 when the draw will be made at the Joshua Tree.

All proceeds raised on the night will go to The Rainbow club for children with Autism.

Sympathy of the CDO is extended to the Leahy/Coveney family of the Joshua Tree on a recent bereavement.

2018-10-25
Frank Goulding
Previous: Ladies are half way through the 2nd comp of the season.
Next: logo