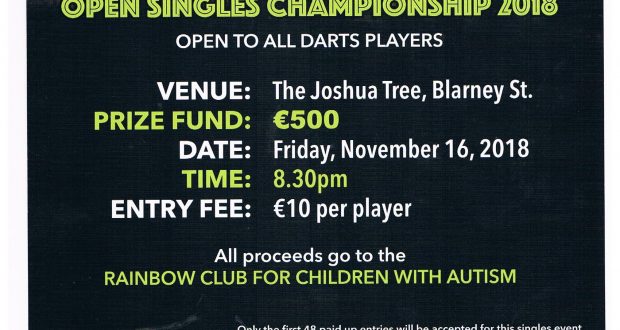 Junior league down to deciders on Monday night.

The final series of matches in the Fosters sponsored Cork Darts Organisation junior league were completed on Monday night last and it’s the Joshua Tree and Aunties who are straight into the semifinals.

Teams who finished in third, fourth, fifth and sixth will now contest the quarterfinals which will be played tonight at the River Lane on Blarney Street and the following is the line-up at the venue tonight:  Gallows 2 v Ma Dullea’s and River Lane 2 v Tower Bar with a 9.30 start for both quarterfinals.

The Fosters super league has two more rounds of competition to be played and as it stands after last Monday night’s games it’s the Harp who lead the way on 31 points after playing six games and they are followed by the Groves on 30 points having played seven games.

The quarterfinals of the Fosters super league will be played on Monday November 26 at the Groves with the semifinals and final to be played at the same venue on Monday December 3.

Final entries for the Cork Darts Organisation charity shield open singles championship will be accepted on Tuesday night at the Joshua Tree where the draw for the competition will also be made.

There will be a prize fund of €500 available on the night to be won and all proceeds raised on the night from entry fees, raffle and donated amounts will go to the Rainbow club for children with Autism.

Ciarán Teehan who plays his darts out of the Harp Bar has once again being successful in an Irish National Darts Organisation national competition when on Saturday night last in Galway the young Teehan won the INDO ranking event as he defeated some very well  known and very experienced performers along the route.

Ciarán has been very much to the forefront here in local darts since his graduation from youths darts only just over a year ago.

Despite not having won any major singles championship locally in Cork  Teehan has been knocking on the door regularly  and has won three major doubles  titles with his partner Jason O’Donovan, we haven’t heard the last or best of Ciarán Teehan yet by a long shot.

2018-11-09
Frank Goulding
Previous: Ladies are half way through the 2nd comp of the season.
Next: logo