Don't Miss
Home > Uncategorised > Harp do the treble at the Groves and Aunties score a maiden at the Riverlane. 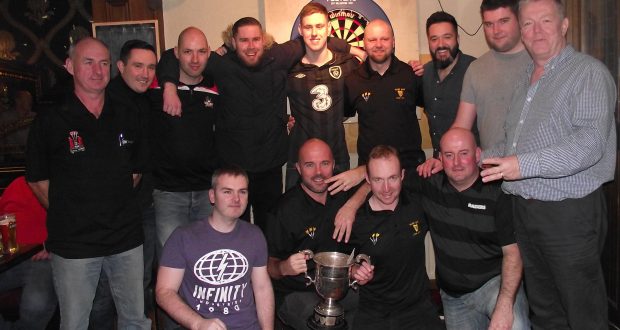 CDO Fosters super league champions the Harp 4-1 winners over the Tower Bar in the final.

Harp do the treble at the Groves and Aunties score a maiden at the Riverlane.

CDO Fosters super league champions the Harp 4-1 winners over the Tower Bar in the final.

The Harp Bar retained the Cork Darts Organisation Fosters sponsored super league title in very impressive fashion as they dominated both the semifinal and final which were played on Monday night last at the Groves in Blackpool.

The Harp opened the defence of their title with a facile 4-0 win over the Joshua Tree but in the other semifinal featuring the Tower Bar and the Groves in was all hands to the pumps as this encounter went all the way to the deciding game before the Tower shaded it on a 4-3 scoreline.

The final brought together a current and a former Irish internationals  in John O’Shea representing the Tower Bar and Radek Szaganski representing the Harp and it was the current Irish star that took the opening leg  but Szaganski fought back to win the following two for a great start for the Harp.

Ciarán Teehan was next on the oche for the Harp and he faced off against Tower number two Mick O’Brien Teehan won the first leg but O’Brien hit some top hands to level  however Teehan upped his scoring rate as he came through to take the decider to have his team 2-0 to the good.

Teehan has been in tremendous darting form over the past 12 months as he won two Irish National Darts Organisation ranking singles titles in recent weeks and to put some more icing on the cake only last Sunday he took the main event at the Westlodge Hotel in Bantry adding the Westlodge Grand Prix to his CV.

Harp then put themselves in a great situation as their number three on the night Jason “Goo” O’Donovan overcame the challenge of William Fouhy, O’Donovan took the second and third legs for the win after Fouhy had won the opening leg.

Just the one game then for the Harp to retain their title but they had to wait a little longer as Tower number four Stephen O’Connor was a 2-1 winner over Gregg Byrne but fittingly the best performance of the final was a game that was very deserving of the man of the match award with Richie McGrath hitting some heavy shots in his 2-0 win over Tower’s Stephen Hill.

Aunties Fosters junior league winners pictured after their 4-2 win over the Joshua Tree in the final played at Riverlane.

The CDO Fosters sponsored junior league final which was played at the River Lane featuring Aunties and the Joshua Tree saw the lads from Tower lift the title after their disappointments of the previous three seasons in this event.

Aunties ran into a 2-0 lead in the final courtesy of Conor Costello defeating Ryan Barrett and John O’Brien getting the better of Tom Barrett but the Joshua Tree fought back to level the match with wins coming from Jim Hyde and Gordan O’Brien  as the break approached.

Aunties once more resumed as they had started with their number five Steven Wills defeating Joshua Tree’s Gavin Bracken and it was done and dusted as Aunties number six, veteran Dan Buckley edged Joshua Tree veteran Jim Fowler with the man of the match award going to Aunties John O’Brien.

Two more finals will be played tonight which will then wrap up 2018 before we recommence on Monday January 9.

The Glenryan will play host to the Fosters first division semifinals and final  which has Quinlan’s playing Ma Dullea’s and Gallows playing Riverlane both at 8.30 with the final to follow.

The Local will stage both semifinals and final of the Fosters second division with Carrigaline GAA club playing St, Vincent’s GAA club and Blackpool Tavern playing Red Cove Inn both at 8.30 with the final to follow.