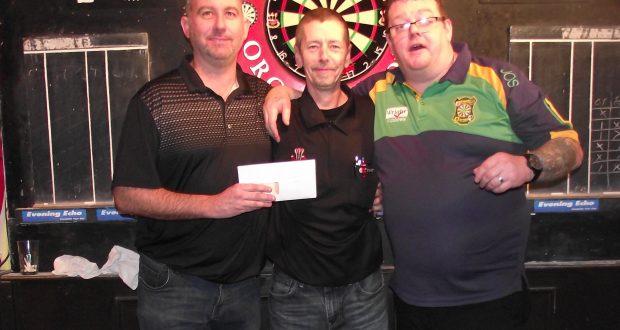 The Tower pairing teamed up for the second doubles event in a-row and accounted for Dylan Murphy and Gordan Hill representing Quinlan’s in the quarterfinals before booking their spot in the final with a win over Pierce Carmody and Jason Long from the Top of the Hill.

Perennial winners of recent times Ciarán Teehan and Jason O’Donovan came through on the other side of the draw with a quarterfinal win over Jonathon English and Jason Galway and a semifinals victory against Richie McGrath and Greg Byrne.

The final which followed saw both pairings exchange top scoring hands and top class finishing before it came to the deciding leg of seven and in a very tense and close leg it was the Tower Bar duo who held their nerve to take the top prize in a 4-3 win.

2019-01-10
Frank Goulding
Previous: Back to full action on the oche tonight.
Next: Riverstown Inn open cup account with win.