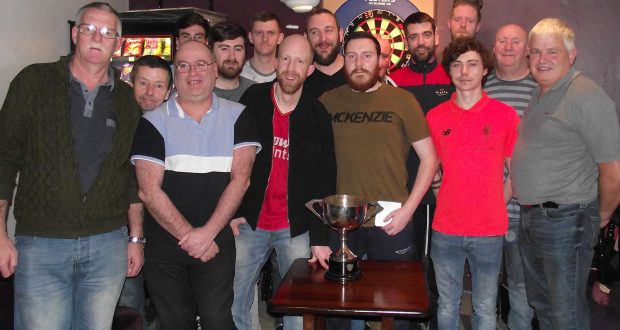 The Gallows edged a little bit closer to leaders Baker Street in the first  section of the CDO Fosters sponsored first division cup after their 6-1 win away to the Island Tavern on Monday night last.

Gallows were not hanging around in this clash as they took the first four games on the scorecard through Steve Harrington winning against Finbarr Keane, Tomás Moloney defeating Jamie O’Connor, Ray Glynn winning against Anthony Murphy and Aaron McGrath getting the better of Damien Long.

TJ Bulmer did reduce the arrears for the Island Tavern with a win over Gallows Will Kennedy but the two remaining games went to the away side as Niall O’Shea and Chris Musgrave defeated Shane O’Callaghan and Liam O’Connor respectively.

Baker Street by virtue of their 5-2 home win over the Old Reliable stay at the top of the section by a single point and they also got off to a great start taking the opening four games  through Paul O’Callaghan winning against Alan O’Sullivan, Chris O’Connell defeating Adrian O’Donovan, Trevor Banks winning against Colin Sheehan and Gavin O’Connor coming out best against Paul Mealy.

The remaining three games saw Scratch Murphy and John McCarthy win for the away side but Derek Sheehy made sure of the five points as he accounted for Frank Leahy in the final game of the evening.

Gerald Griffin have taken over at the top of section two after their 5-2 win away to the Groves thanks to wins from Tim Marshall, Garry Dowling, John McCormack, Dave Looney and John Marshall while best for the Groves were Pat O’Driscoll and Martin Cotter.

Over in the Fosters sponsored second division cup Blackpool Sports Tavern won their second game in-a-row as they travelled to the Residence and came away with a 4-3 win while Aunties done even better as they accounted for the Glenryan Tavern 1 by 6-1 on the Glenryan board.

It was a very bad night overall for both Glenryan Tavern teams as the second squad also went heavily away to the Shamrock Bar again here by 6-1 and I’m sure the Glenryan will want to put those results behind them when they take to the oche tonight.

Ma Dullea’scame away from their local derby clash against the Gallows also in the junior cup with a 5-2 win thanks to fine performances from Jamie Wallace, Alan Greaney, David Delea Jnr, Noel Hornibrook and Mossey Holland while wins for the Gallows came from Willie Murphy Jnr and Eddie Cullinane.

2019-01-25
Frank Goulding
Previous: Ladies are half way through the 2nd comp of the season.
Next: logo