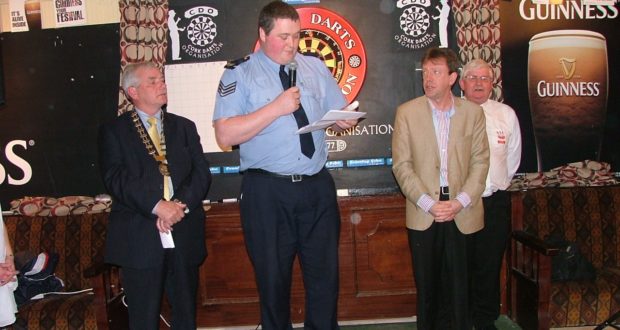 The eight man team of darts players from the CDO set a new world record of 35,087 for non stop one hour points scoring in their attempt at the standing Guinness world recordTM of 21,944 at St, Vincent’s Hurling and Football club yesterday.

Local councillors and members of the Gardai were all present to witness the event, along with former MEP Kathy Synott from the Hope Foundation who were the beneficiary’s of all the proceeds raised on the day.

This point’s score will now go to Guinness world recordsTM for ratification as a new world record.

The present record stands at 21,944 which was set on September 9 of last year at the Marske Cricket club which is a town situated in Middlesbrough in the Northeast of England.
A team of eight men, which included world ranked number 9 Colin Osborne in their side set a total points score of 21,944 between noon and 1pm on the day.
Michelle O’Toole of MOT promotions was the event organiser for this attempt at the Guinness World recordTM score and began her research into this category back in November of last year.
Michelle then brought her idea to the attention of the Cork Darts Organisation to get the backing of an organised body which was required by Guinness World recordsTM.
Michelle was received very enthusiastically by the CDO committee who promised her their full co-operation in the challenge.
Further meetings then followed and a list of 10 players from which the eight that would make an attempt at the Guinness world recordTM was selected.

A full rehearsal was then penciled in for Sunday February 21 at St, Vincent’s at which all selected players, callers, markers, score recorders, time keepers, video makers and all others that are necessary for such an occasion were present.
The selected players did on the day actually go beyond the standing Guinness world recordTM during the rehearsal and they did feel very confident that they could do the business on Saturday last.

A packed Vincent’s clubhouse anxiously awaited the arrival of the players on stage who would attempt to dismantle the standing score which was set by the previous team from Marske.

Three video recording cameras were in place to record every dart that was thrown, with the camera team organised by Laura Flanagan, video producer from St, Johns College.

Score marker Tim Jones was ably assisted by the superb Sean Leahy who was the score caller for the attempt, and Chairman of the CDO Roy O’Donovan set the attempt in motion will a shrill blow on his whistle at exactly 5 o’clock.

The players were noticeably tentative for the opening five minutes or so and this showed in their scores return, but with the packed Vincent’s club pavilion getting behind them they soon raised the ante.

How fitting then that the first score of a maximum 180 should go to none other than living Cork darts legend Steven Coveney who then brought the house to it’s feet when he soon followed with a further maximum 180.

Altogether there were eight scores of maximum 180’s thrown during the record attempt along with numerous scores of 140 and 120 and many scores in excess of 100.

When Roy O’Donovan blew the whistle to bring the record attempt to a close the venue erupted, as many people who themselves were keeping track on the scores with their own calculators knew that the standing record had been surpassed, big time.

This was a really top class performance by the lads who had been gearing themselves up with regular practice sessions for this attack on the Guinness world recordTM for an eight man non stop one hour points scoring record.

2020-04-02
Frank Goulding
Previous: Ladies are half way through the 2nd comp of the season.
Next: logo