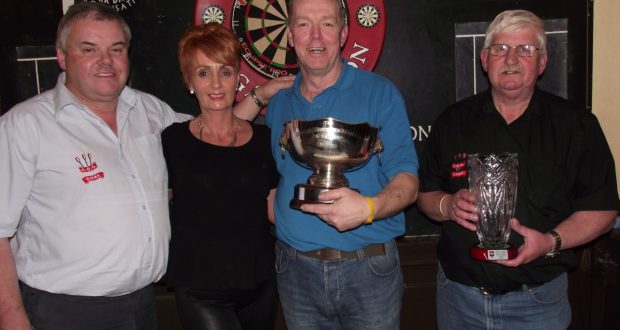 The 36th, Annual General Meeting of the Cork Darts Organisation was held at the Local .

Off season competition winners in the Shandon View charity Leukaemia tournament it was the Gerald Griffin who were the winners and in the CDO Summer league and summer singles competitions played at the Local it was Brannigans who took the team summer league event while in the summer singles championship it was John O’Shea representing the Tower Bar who came through to win against defending champion Kevin McDonnell.

Kevin McDonnell was the winner of the annual Donal “Duckser ” Martin memorial individual championship which was played at St, Vincent’s while william Fouhy representing the Muskerry Arms won the Sean Street memorial B and C singles and soon added the Pat Corcoran memorial singles championship to his arsenal.

Ma Dullea’s ladies B team were the winners of the league and Caroline Coutts won her second Diane McCarthy memorial singles championship which was played at the Brown Derby on Barrack Street.

Joshua Tree second team collected the CDO Beamish B division cup as they defeated the Gallows in an outstanding and exciting final played at the Joshua Tree which went all the way to the deciding leg of the seventh game which Denis Dowling took for the Joshua Tree against Mark Twomey.

Consolation for the Gallows was in Ken O’Mahony receiving the man of the match award.

Damien O’Driscoll and John Paul Dowdall won both the CDO New year doubles and Easter darts gala played at St, Vincent’s and it was the Shamrock Bar who came away from the Hollyhill Inn with the CDO challenge cup for season 2012/2013 after their win against the Anglers Sports Bar.

Battle for honours in Premier league