It was an exciting evening in the Joshua Tree bar on Friday last for the Cork Darts Orginisation as the 72nd Cork City Individuals, sponsored by The Joshua Tree Bar & Budweiser, was staged after a 2-year suspension due to the global pandemic.

62 entrants attended on the night in a battle to win the prestigious Cup, formally known as the Murphy’s Individuals. But before a dart was thrown, M.C. Sean Leahy gave a special announcement and dedicated the event to John “Dinny Bobs” McCarthy, (RIP) who won this competition in 2012.

John Paul Dowdall was crowned the 2022 Cork City Individual Champion, which was a dream come true for him.  He overcame some fantastic players on route to the final. Dowdall got the better of Krystof, Adam Filed, Paul Magee, 3 time winner and defending Champion, Stevie O’Connor, and Dave Donnachie, from the Cow Bar to get to the final. In the other half of the draw, it was William Fouhy that fought to the final beating Gary Morrissey, Dave Sexton, Jason Galway, Eddy Moynihan and Tommy Barrett.

The stage was set in the packed venue as 62 became 2.  William Fouhy got the final underway but failed to hit the starting double on his first visit.  Dowdall took full advantage and took the throw with a 112 start.  On his second visit, it was a blank again for William, who failed to get off the blocks. It’s all about the doubles in this unique event of 301 double off, and it wasn’t Fouhy’s night for doubles. JP hit 100 to leave 89, and Fouhy hit the double on his 3rd attempt to avoid the dreaded brush.  Dowdall checked out the 89 and was 1 up.  Wheels turned in the 2nd leg, when Dowdall failed to get off on his first visit, and fouhy hit double 16, 20 and 20 to take the throw. Dowdall did get off with 32 on his second throw but Fouhy scored 85, 81, and checked out 63 to make it level pegging. The darts were back with JP, and it was neck and neck in the 3rd leg but JP took it out with double 16. Fouhy had the throw in leg 4 but failed once again to get the starting double on the first visit. In a race to 3, there isn’t much room for error and at 2-1 down, it seemed a big task for Fouhy to catch up as JP got off on his first throw with double 16, 20, 20.  William hit tops with his 3rd dart in his 2nd visit and JP replied with 100.  Fouhy hit 125 and was down to 136 for his next throw.  Dowdall hit 97 to leave 32 for the match, and Fouhy was very unlucky on the 136 hitting 2 treble 20’s and wiring the double 8 to level the match. But it was JP to check out 32 by hitting a single 16 and clinging double 8, to win the match and the title of 2022 Cork City Individuals Champion.

“This is the one event I dreamed of winning for as long as I’m playing darts.  I reached the Semi-finals twice,and in 2015 I lost in the final to John Kiely. I said to my Dad years ago that one day my name will be on that trophy.  I honestly can’t describe how I’m feeling now, it’s a dream come true for me. I want to dedicate this win to a great friend that has given me loads of advice for years, Dinny Bobs”

John Paul went to ring his father, John, after his victory to tell him the news that he had won.  John himself took part in this event in the 80’s and 90’s but never got to lift the cup.  John was also part of the Cork team in 1982, the first year that Cork won the all Irelands. In 2000, Cork did the treble, winning the mens, Ladies and youths all Irelands, and it was fantastic that both John Paul and Dad, John received all Ireland medals that year.  Then, in 2008, John Paul received an All-Ireland medal himself when Cork won the mens all Irelands.

Cork Youth Darts held the 2nd ranking for 2022/2023 season at the Harp bar last Saturday.  29 youths were in attendance and all played their best to be in with a chance to play for Cork in the youths All Irelands next March.  It was a Double for Ian Kelleher, as he once again won the cup event, beating Callum Coade in the final.  The other semi-finals were Jamie Farrell and Shane Long.  Jayden Fitzgerald won the shield event, beating last ranking’s shield winner, William Fitzpatrick. 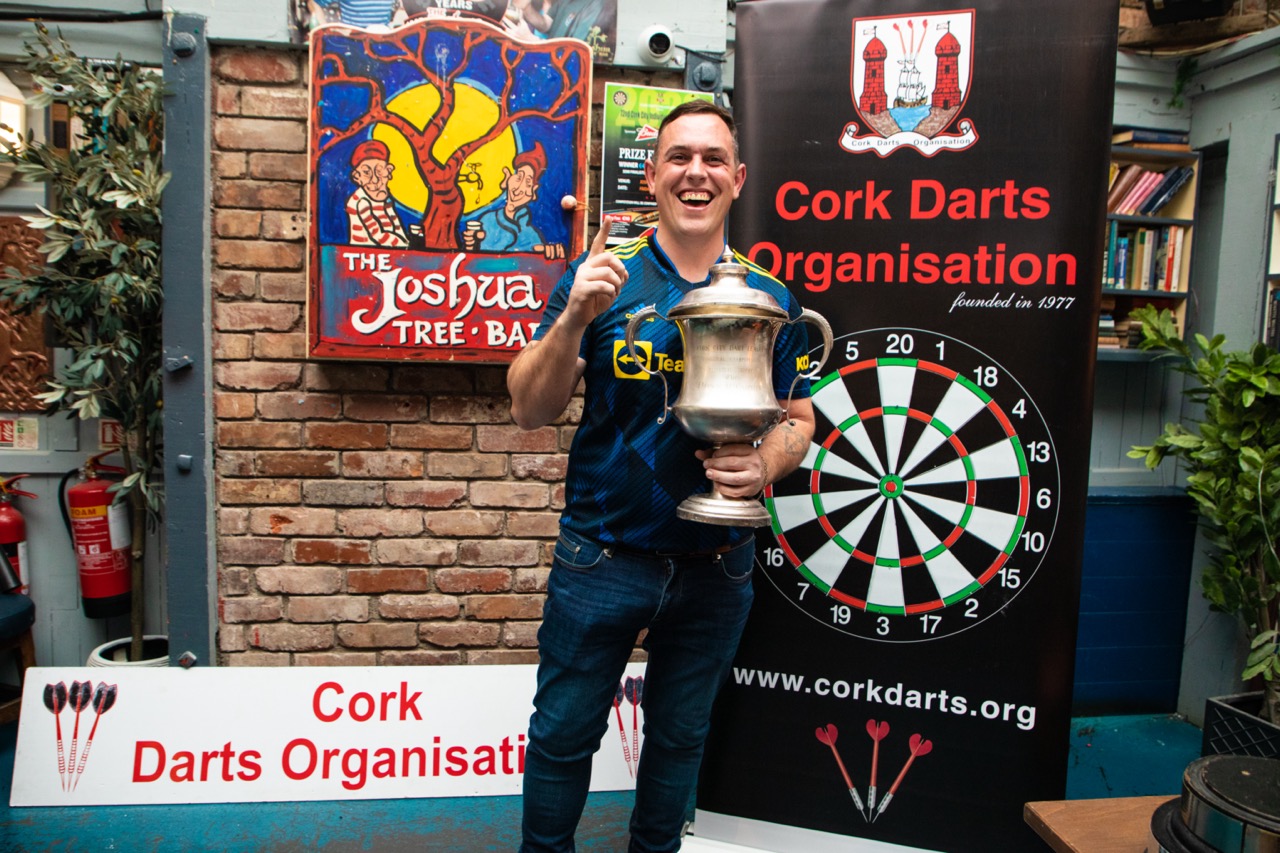 Is your name on this list of paid-up entries.

City singles is back for 72nd, time.